This Add-On primarily supports making maps of an alchemist’s lab, office, workshop, or store, but it could also server to decorate other types of maps, such as a wizard’s workshop, an astronomer’s lab, or a small study/library. It contains mapping elements such as workstations, wooden furniture, tools of the trade, and flasks/potions galore.

This Add-On is primarily intended for fantasy/medieval settings. It also contains additional bonus items that have nothing to do with alchemy (see inventory).

All artwork in this Add-On was either created by Steve Gaudreau (aka “Supercaptain” from the Dundjinni forums), or derived from his work in some way (e.g., color mods).

There are no reviews yet.

Only logged in customers who have purchased this product may leave a review.

Support us on Patreon

Help us bring the CSUAC (and other great content) to MapForge, in the form of free Add-Ons for everyone!

Got a question? Need tech support? Just wanna chat and hang out with other mappers? 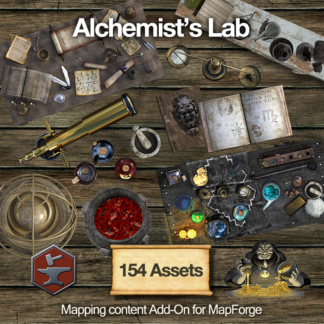