This Add-On contains a range of sci-fi props and furniture that a GM can use to decorate and add detail to their science fiction maps. It can be used to complement our Sci-Fi Map Tiles.

Add computer banks, tables, chairs, equipment, and other props to your layout as you construct a role-playing map for systems such as GURPS, Starfinder, Shadowrun, Paranoia, or any other science fiction based roleplaying game.

There are 72 token sets in this two-part Add-On, with each token set depicting one object from a number of orientations. There are generators, laser pistols, containers, specimen jars, hand-held scanners, boxes, chairs, tables, sensor systems, and a wealth of random gadgets.

Most assets in this Add-On are rendered from an offset top-down view with the object turned 45 degrees between each render. This is done to create the appearance of “depth and detail”. Some sets do not have each angle rendered because the object looks the same regardless of which side has been rendered.

This Add-On is intended for use in sci-fi settings.

This set is so large (781 assets) that it has been separated into two distinct Add-Ons. You can enable or disable each Add-On as needed during each mapping session.

There are no reviews yet.

Only logged in customers who have purchased this product may leave a review.

Got a question? Need tech support? Just wanna chat and hang out with other mappers? 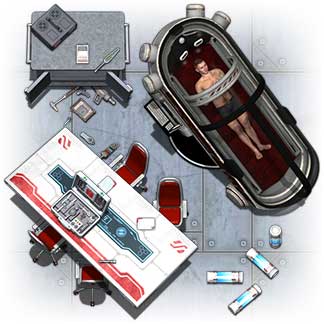